Congratulations go to Josh Solomon who has raised over £2,000 for Macmillan Cancer Support by cycling from London to Paris. More than £1,500 of this was raised through a fundraising coffee morning organised in the Jubilee Hall by his grandmother Shirley Jory on Saturday 16 July 2016 –  £770 was raised directly from those who attended, and this was matched by a further £770 from Josh’s employer, npower.

Josh has written the following to thank everyone for their support at the fundraising morning:

I would like to thank everybody who came along to the fundraising event in Mount for my London to Paris bike ride, and especially to everyone who helped organise everything! After 3 long days and cycling 200 miles, I finally arrived under the Eiffel Tower in Paris along with 40 of my colleagues from npower. We all took part in the cycle to raise money for Macmillan Cancer Support, who we work in partnership with. One example of how we work together is that we will cap energy bills at an affordable level for those suffering with Cancer, meaning that when times are tough, people do not have to worry about turning the heating up or paying expensive bills. 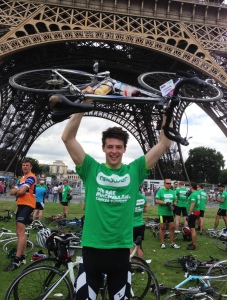 In the village hall you all managed to raise an amazing £770, which is fantastic given the size of the village! This will all be matched by work, so that means that thanks to you all £1,540 will be going to charity! After being matched by npower my final fundraising total was £2,228 and the total for the whole team was £57,697!!

So again, a massive thank you to everyone who donated and helped to raise so much money, its very kind of you all and I greatly appreciate it!

Due to Corona, many regular and other scheduled events have been cancelled or postponed, and the Jubilee Hall is not available for hire.

BUT there are church services held physically (alternating St Neot / Warleggan) and shown online, and Village Greens shop is functioning, but by pre-booked collection or delivery only – see how to order .

The following are affected:

Monday and Thursday mornings: Age Concern Bus from your house to where you want in Bodmin, £5 return – currently changed system

Have you got something to say?

Have you got something to say? If so, please contact us*