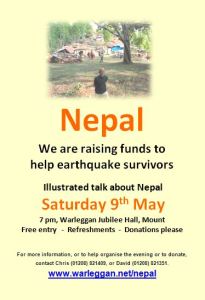 This is brilliant – many thanks to everyone for their amazing generosity, both in making the donations, and in bringing all the goodies for raffle, cake stall etc. on the evening.

There was an illustrated talk about the country by Chris W. on Saturday 9th May, 7 pm, in the Warleggan Jubilee Hall, Mount, with raffle, mini-auction, pasties, cakes and other refreshments – and so many people came!  Sorry to those at the back who were forced to stand.

Chris spent over four years working in Nepal, and, as part of the development effort there, was amongst other things involved in earthquake preparedness programmes and disaster mitigation more generally.

He’s kept in touch with friends in the country, and will continue posting updates and reports from some of the small groups who already are helping the survivors at this time of need (see below). 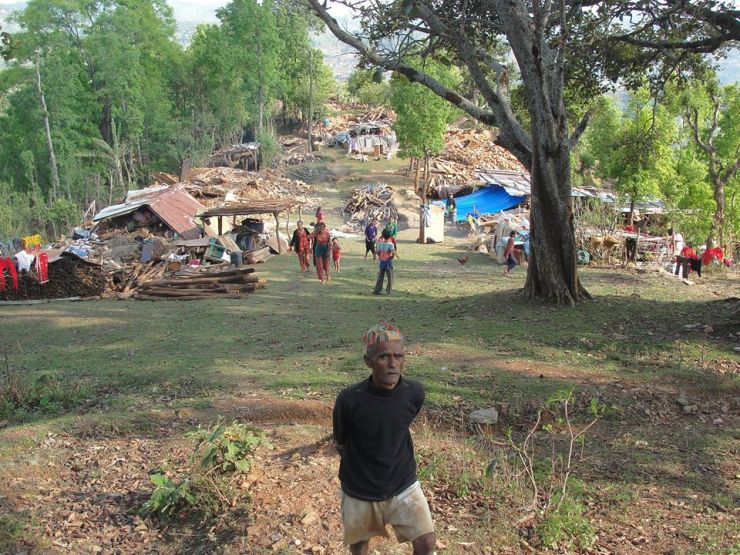 Through our fundraising evening we are supporting:

Here’s a selection of other charities you might want to consider:

Updates from friends in Nepal:

Kent, 28 May 2015:  Many donors have wanted to know how far their money will go, what it will buy/has bought. Here is a list of some representative items and their costs. The rate has been right around 100 Nepali rupees for one dollar [£0.65], so for those who want it in rupees, it’s an easy multiplication. The prices are averages, depending on demand and also brand, prices vary. We’ve spent almost $20,000 [£13,000] on relief so far. Our loads increased until we were hauling between 1650 – 1,980 pounds of rice in the van plus many other food items. The total expenditure also includes diesel, van repairs, vehicle rentals (including one day using a helicopter), snacks eaten while doing the delivery and distribution. If you have passed on donations from others who were interested in knowing how far their money went and on what it was spent, please share this with those individuals. Rajendra has continued delivering relief. We are also going to start building schools and repairing the LAM homes. The van repair–replacing the clutch–cost $160 [£104]. I thought this worth mentioning since I am guessing this figure is significantly different than it would be in the US and many other countries.

Sonia, 12 May 2015: It took us all by surprise… we hadn’t experienced a shake for more than 24 hours. restaurants and bars were just starting to re-open and life in Kathmandu was starting to regain slowly some normalcy… then at around 1pm today the earth shook big time once again… the new sturdy house I’m in now was shaking and wobbling and while I don’t know how many seconds it lasted it seemed like a never ending shake… after a while I went around in town… everyone was outside, the few open spaces in the city were packed once again… I think many people will sleep outside tonight. We all thought in the past couple of days that it was the end of this nightmare, but we don’t know anymore. The epicenter of the 7.4 earthquake near the Everest was felt even in New Delhi I heard, and in Mahendranagar at the far western end of Nepal. What’s on many people’s mind is what if the next big one epicenter is in Kathmandu? I don’t want to think about that.

Kent 6 May:  Here’s a video (see above) of Pipoli, Dhading. We drove about five hours to a place called Nilkantha, Dhading where we heard aid was needed. On the way, we picked up two armed police (ha-ha-ha) who needed a ride to Dhading. They told us Nilkantha didn’t need help, but gave us the name of another place. One of the police came with us to give aid; but the van couldn’t make it–we got stuck in the mud; we burnt lots of rubber on rocky seams that cut through the steep road. We scraped the bottom of the van against rocks–all normal, but this time, we just couldn’t make it. We tried another place, before we even tried, people told us we’d never make it. We tried to rent a 4 wheel drive vehicle, but I didn’t have enough money. Frustrated, we decided to turn home. On the way, I saw a cluster of four or five houses that were partially destroyed, so we stopped to give them some aid. A man who happened to be there told me that his village was just a little way up a doable hill and that they very much needed help. The others confirmed this. “Just a few minutes…very doable road” he told us. So we headed up. It road was so steep and in such poor condition I had to leave all the team at the bottom of the mountain to lessen the load. The man ran behind me and with some local boys, dug/pushed me out multiple times. The drop offs were such that my hands were shaking by the time I got to the village more than an hour later. Though the way up was hardly “a few minutes” on a “very doable road” it was worth going up, and worth a white lie. The village was leveled. All food stuffs were buried. Even their water supply from a tap jutting out of the earth had run dry due to the fissures inside the mountain draining away the ground water. They had no food because it was all buried under the rubble of their homes. Nobody had reached them yet. They were the most cohesive community yet–very beautiful people. I didn’t have to bark any commands about sharing or standing back as we unload. In fact, I just let them unpack the van. I can’t make that trip again myself, but I’ll send more supplies via a 4 wheel drive and a driver.

Kent 6 May:  Though I’m probably the most garishly vocal, there are thousands of people on the ground doing what they can and many are doing much more than we are bringing big trucks in or organizing teams to help in various ways. For example, every day, Alisha has gone with her college to villages in the outskirts of Kathmandu and without fanfare helped to build toilets, provide aid and the like. Rajendra Budhathoki has done the same. Puja has done the same and of course many not from our home have done likewise. I hope that the goal of raising funding so more help can be given excuses the constant posts. Thanks you for the continuing support. Our van is fixed, we’ve been donated a whole bunch of plastic sheets for temporary shelter (which is almost impossible to find in KTM now) and we are heading out in a few hours.

Kent 5 May:   The van’s clutch is no longer working properly, and I don’t think mine is either. So we’ll take a break until it is fixed. Also, it does appear that at least all the areas we can reach until a helicopter is donated, have received at least some aid. India and China’s presence here is very evident. They are working hard and fast. The general public is also sending out so much help.

Sonia, 1 May:  Many people are mobilising themselves and others to help bringing relief to those in needs. Informal volunteer groups have mushroomed everywhere for some small sometimes medium scale action. I went to a couple of such groups. It’s all a bit disorganised but many just want to do something however small it might be.

I finally ended up responding to a call from a friend who was looking for a couple of volunteers to give a little help and support to a small medical team from a local community. We went to the ground of the army camp in Swoyambhu where in the first few days after the big quake there were around 6,000 people sleeping there. In the past few days there has been an “urban exodus” of 400,000 people according to the newspapers… everyone wants to get back to their village, to their families. Now the camp is much less crowded but basic medical help was needed for the couple of hundred people still there. Besides contusions, major complaints were headaches, respiratory problems, fever and anxiety. I helped taking down names and BPs with other young volunteers and soldiers.

When we left, a little boy with fever and sad eyes told me “thanks for helping us”. I nearly cried. After that we went to Swoyambunath. It is closed to the public now so in a way I was lucky to be with the med team and I saw the terrible devastation of this beautiful religious site… a place I went to so many times…. It was one of the saddest afternoons of my life. A man who lives there talked to me for a long time. He had so much to tell, so much pain in his heart.

I went back home with a heavy heart myself… but on the way I also saw some beautiful scenes: 2 children playing with an old kid bicycle, one little girl cuddling a street dog… This helped me push away the anger I feel when I hear that the government now feels that Search and Rescue should stop… better to focus on medical help. But yesterday a little girl was found alive from under the rubble, and there is still hope that many people are still alive buried under their house… and there is so much more to tell, but right now I can’t… too tired, too strained…

Kent, 1 May: Today we brought 924 pounds of rice, 132 pounds of lentils, 198 pounds of soy protein (cooked in curry and actually tasty), 300 packets of instant noodles and 300 small packets of crackers/cookies. It was all for about 300 dollars. In addition to food needs, there are shelter needs and rebuilding needs. Thank you so much to all who have donated–you are giving food to people who need it, one old man told us today he hadn’t eaten in seven days.

Shovha, 30 April: Today, we went to Rajendra, Sunita and Sharmila’s village, Bansbari in Sindhupalchowk. Again, all the houses were destroyed and we were the first to offer aid. They were so happy to see us. Here are some photos. Tomorrow, we go to Suman, Mina and Bina’s village which is in similar condition. If anyone reading this is willing to lend or rent a four-wheel vehicle, we will take it. We very much need it. We are going where no van has gone before–and I’m not sure how much more the van can go.

Kent, 29 April:  For $244 (£160), we bought 660 pounds of rice, 150 packages of instant noodles, 15.4 pounds of salt, 55 pounds of lentils, 10 pounds of tea, 33 pounds of beaten rice, 180 packets of crackers, 17.6 pounds of soy protein, plastic bags to divide it all into. We then drove 4½  hours to a remote area in Sindhupalchowk and distributed it. There were no houses standing in many of the villages. We were the first to give aid to this area.  [the photos at the top of this page are some of those taken during this visit]

Neema, 29 April:  I spoke to my friend via Facebook today. He is a hotel owner in Nagarkot, Nepal. 90% of the buildings have collapsed, no rescue team has come there so far. The death toll is 35. There is no food or shelter.

One Reply to “Nepal earthquake”

This site uses Akismet to reduce spam. Learn how your comment data is processed.